Random Lessons from Easter and Beyond

Although it's only been a few months, I have learned a lot so far this year. Here are a few examples:

** I have found out that when you open the world of reading and writing to your children, you will find all sorts of interesting thoughts laying about. For instance, take this sign that Aidan wrote and then posted outside his bedroom door a little while back: 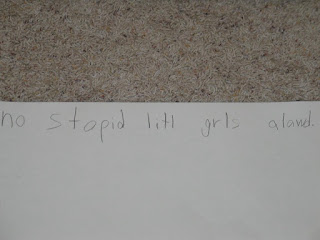 I'm thinking we may need to work a bit more on his spelling (among other things)....


** Then there was Easter morning. I had really prepared well (so I thought); the girls and I had made the dough for Sticky Buns the day before since it has to rise and then get beaten down and then rise again. We awoke (way too early!) on Easter morning, excitedly found Easter baskets, went on an egg hunt and with about an hour left before heading to church, we went to roll, cut and cook the Sticky Buns only to find that it is very important to read ALL the directions beforehand, not just the first page. (As usual, you were right mom...) I had missed the fact that the dough has to rise a third time after you cut the buns and get them ready in the sugar-and-nut coated dish. (I think the recipe must be straight out of the Bible: "And on the third day, the Sticky Buns arose and went to sitteth next to the half-chewed chocolate eggs and Easter candy for all of eternity, or at least until the next religious movement.") Needless-to-say, we had Easter Bagels instead. Betcha didn't know there was such a thing, eh?

** Kurt and I had volunteered to teach the preschool class that morning. After sitting there for a good ten minutes, no kids other than our own had shown up. I looked over and saw Kurt slumped over exhausted in a chair and suggested he go sleep in the car; I'd just wait a while longer to see if anyone showed up. He couldn't have been gone for more than 5 minutes when about seven more 3 to 5 year old children arrived. No biggie, what's seven more?! After we painted...ok, I have to stop here to say that it is very unwise judgment to have a bunch of squirrely, sugar-loaded preschoolers paint IN THEIR EASTER CLOTHES! (Not sure what I was thinking actually...maybe that I was hungry for sticky buns?) Anyway, after we painted and cleaned up, went over a simple bible-verse and did a good ten minutes of the bunny hop to jump out some of that excited energy, I sat the kids down to discuss the meaning behind Easter.

"Do any of you know why we celebrate Easter?" I asked.

"Oh, I know, because Jesus was raised from the dead!" Aidan exclaimed.

"Can anyone tell me the rest of the story?" I asked.

"Well, they hung him on a cross and then he died and then he was put in a tomb with a big rock in front of it," another child said.

"And what happened when the women went to the tomb on Easter morning?" I asked.

"That's right, the rock was rolled away and..." I started to say.

And then one overly eager little girl shouted, "And then the Easter Bunny came out and hid lots of chocolate eggs all over for us to find!"

Hee hee, right. About the time an angel told Jesus' groupies that Jesus was "stayin' alive, stayin' alive" and was all, "go tell the others," out hopped the Easter Bunny, hiding eggs all over Jerusalem. It was just like that....you know how history gets a little fuzzy sometimes....

** I also learned that the same child who exclaims, "This is the BEST DAY EVER!" a dozen times on Easter morning, might very likely be the same child who is screaming, crying, and cursing the very fact that Easter exists by the end of the candy-overloaded day....it's almost routine for any holiday actually...I wonder why it isn't a disclaimer on any of the candy wrappers?

** Finally, yesterday I allowed Aidan to do some "cooking" on his own and we learned that Lily likes Cheesy Cheerios (it just proves that melted cheese can work on about anything....ew.) And I also learned that it isn't necessarily common sense to not put a plastic cup (filled with smashed grapes and water...I was told it was going to be "grape tea") in the toaster oven. I suppose I need to also warn Aidan about the effects of metal in the microwave one of these days. Hmmm, on second thought, I'd better not....

Have a great weekend, and don't forget to put in your entry for the latest contest! I've had some really great guesses so far....can't wait to see what the rest of you think!
Posted by karen diane at 7:48 PM