Tip of the day: When you have 4 small children, it is never a good idea to buy fresh chicken that needs to be used the same day, or even by the next day. (Unless of course you don't mind eating chicken that was supposed to be used 3 or 4 days earlier...then I say, "Go For It!")
Even the best intentions often get swallowed up by the unexpected. A good friend of mine once read our Mom's Group a poem saying "God bless our good intentions." Of course, we never fail to follow through on our good intentions around here...(In case you didn't already, insert sarcasm around "Of Course"...) Actually, I think I ask God to bless my good intentions at least once a day...
Likewise, a mother of 4 should NEVER say she will get on and blog something the very next day, complete with pictures no less, unless she happens to have that something written and on auto-send (if that is even possible). You know, kind of like you never ask a woman if she is pregnant unless you can see the baby on its way out of her. So, for this mistake, I apologize. I know you all have been eagerly awaiting Lily's birthday post with the pictures...
So, here it is. Lily's 2nd birthday.
First, we dropped Aidan off at school and went next door to our favorite coffee shop, Sugar Pies. Tami, the owner, is very hands on and loves kids. She brought out some musical instruments and sang Happy Birthday and then read books to Madeline and gave the girls each a bandana (ok, so the bandanas are technically meant for dogs but hey, they are cute on little girls, too.) 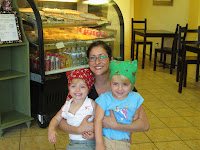 Then we headed out to the store to pick out a little gift. Lily picked out a box of three super friends (which Aidan immediately traded for some of his old ones) and a little pink purse and Madeline wanted to get Lily a My Little Pony (which she traded for one of her old ones). (Liam didn't seem to care so long as he got to sleep through it all and Lily was just happy to have a purse to stash Batman in.)
Finally, we weren't going to throw a party because we are cutting back some on our budget, and parties, well, they get kind of expensive. (Plus, she's two! Like she cares!) So, we decided to go with the left over cake I already wrote about and the little token gift. And then I won this free balloon bouquet to be delivered by Princess Pipsqueak, a real live clown. And since I LOVE CLOWNS and some day think it would be fun to BE A CLOWN (more on that later) I thought, hey, this is the perfect birthday gift for a 2 year old (and her mother). And then I spoke to Princess Pipsqueak and she was all, "Sooooo, you aren't have a party for your kid's birthday? (pause) Don't you think she might want a friend or two around to meet the clown at least?" (insert GUILT at will...) And as we thought about it, well, Lily does have a little friend here (Mia) and we thought, hey, that would be nice. So, Lily ended up with her little friend (and her family) over to enjoy an AWESOME cake from Dairy Queen (see previous post) and a Clown who chased them around the house until they were all worn out. God bless our good intentions but thanks for giving us what we didn't plan as well! 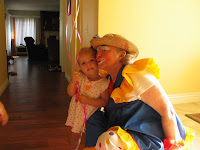 Lily cuddles up to Princess Pipsqueak 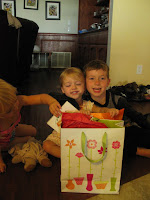 Lily opens her gift, with a little help from her siblings 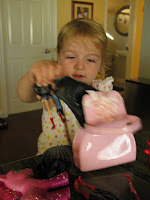 Lily inserts Batman into her pink purse...you just never know when you may need him... 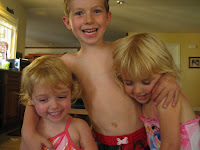